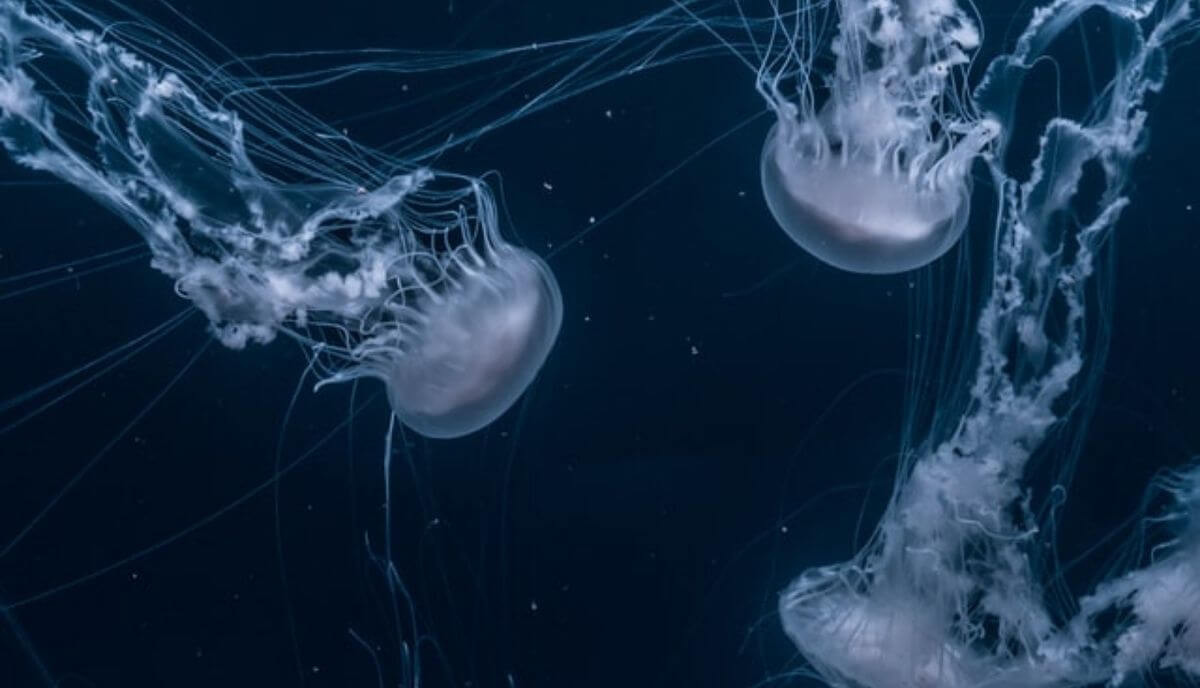 As the famous saying goes, “For the blood is life!” It runs through all creatures. More importantly, it carries important nutrients and oxygen through their bodies.

But is it true for all animals, are there creatures without blood? Surprisingly yes!

Jellyfish, sea sponges, coral polyps, flatworms, sea anemones, and hydras are animals without blood. These creatures do not possess a circulatory system, and hence do not have a single drop of the life-giving liquid. Almost all of these bloodless creatures live underwater.

And yet, they have managed to survive; some, even since the start of the evolution of the species.

Let us look at some of these unique animals without blood

These strange creatures appeared in the sea 600 million years ago. They are one of the first animals on the earth. As they are largely made of water (98%), jellyfish cannot resist sea currents. They are creatures without bones, blood, brains, or fangs.

Jellyfish have many poisonous tentacles and are predators of the sea. Even though they seem limp and harmless, they can kill their prey using poison. While hunting, jellyfish silently wait for their prey. When the prey is close enough, the jellyfish attack it using their poisonous tentacles. The poison paralyzes the prey, and they get devoured.

Jellyfish are present in many different shapes, sizes, and colors, and they also have a total of 24 eyes! The lion’s mane is the largest jellyfish measuring up to 120 feet. The smallest one is the Irukandji jellyfish. It grows up to one centimeter. Some species can even glow in the dark while others are rumored to be immortal!

Fun fact: Jellyfish sting around 150 million people each year! Around 1,000 people have already been stung by the time you complete this sentence!

At first glance, sea sponges look like underwater plants of the sea. But, these bloodless animals are one of the oldest primitive multi-cellular organisms around. They were a part of the ocean even 600 million years ago!

These ornamental-looking creatures do not move around. Sea sponges don’t have blood, muscles, or a nervous system. Nor do they have any internal organs.

Sea sponges can be as large as 10 meters or smaller than a few millimeters. The largest species of sea sponge around on earth is the giant barrel. It is found in the Caribbean coral reefs.

These creatures mainly feed on microorganisms. They filter a large quantity of seawater every day to squeeze out oxygen and other food from it. They also come in a variety of fascinating shapes.

Fun fact: The average sea sponge can live up to 200 years!

Here is another fascinating sea animal without blood on our list. Coral polyps also look like beautiful underwater sea plants. They live at the bottom of the ocean mostly. Unlike sea sponges, coral polyps have digestive and nervous systems. They also have a calcareous skeleton but do not have blood.

They are immovable predators. Ironic, isn’t it? Even though they don’t move much, they prey on any crustaceans and fish. Using their tentacles, coral polyps hunt other small animals for food.

Dually they can also perform photosynthesis. A unicellular alga in the structure of the coral cells performs this function. The algae, when exposed to light, create nutrients, which are used by the corals. So they exhibit both animal and plant-like behavior.

Coral polyps also prefer warmer waters. After death, these coral polyps form a part of the coral reefs. These reefs are created from the skeletons of coral polyps over many millennia. They are the heritage structures of the ocean.

The majestic Great Barrier reef is the world’s largest coral reef in the Coral Sea. It is based off the coast of Queensland in Australia and is a world heritage site.

Perhaps the scariest creature on the list, flatworms are endoparasites. They do not have their organs to hunt for food, so they live inside other underwater creatures for nutrition. Just like other parasites, they move through the intestines of their host and use the nutrition from foods ingested by the host.

As the name suggests, flatworms are flat in shape and length. They are hermaphrodites; i.e., they have both male and female reproductive organs. So, they procreate by laying eggs or dividing themselves in half.

As with all other creatures on the list, they do not have blood or a circulatory system. Some species of flatworms do not even have intestines.

Fun fact: The real lifespan of a flatworm is unknown, however, in captivity, a flatworm can live for 65 to 140 days.

Sea anemones are also known as the “flowers of the sea”, and they are unique-looking creatures. There are around 1,000 species of sea anemones, and their closest relatives are jellyfish and corals.

These predatory marine animals spend most of their time on the bottom of the sea, attached to rocks, waiting for their next meal to pass nearby, They are carnivorous animals, feeding mostly on small fish.

According to Nat Geo, these flower-looking creatures create alliances with clownish. Namely, they will the fish live within their tentacles, thus protecting it from various predators; while in return, anemones would feast on leftovers from the fishs’ meals.

Sea anemones have a primitive nervous system, animals without blood or brain. They also have muscles and nerves that are much simpler than in other animals. And unlike other cnidarians, sea anemones do not have the stage of free-swimming life.

Fun fact: Sea anemones have the ability to clone themselves!

The last members on our list of bloodless animals are Hydras. Their bodies consist of a thin tube that is about 1 inch long, however, it is capable of high contraction, especially when hunting. These small simple animals with tentacles are usually found in tropical regions.

Hydras have a simple nervous system, and they do not have recognizable brains or muscles. They are usually sedentary animals, without moving quite often, except when hunting.

The main diet of hydras consists of small aquatic invertebrates such as crustaceans.

Fun fact: Due to their regeneration ability, hydras are immortal creatures!

And there you have it. You’ve come to an end of the “animals without blood” article. Besides not having blood, all these animals share one trait. They are all invertebrates, thus they do not have backbones.

Did you already know some of the animals from the list but couldn’t recall it?

Either way, we hope you enjoyed this read or that you have learned something new about these strange bloodless creatures.

For the very end, here’s a recommendation to a similar read: Animals with no legs