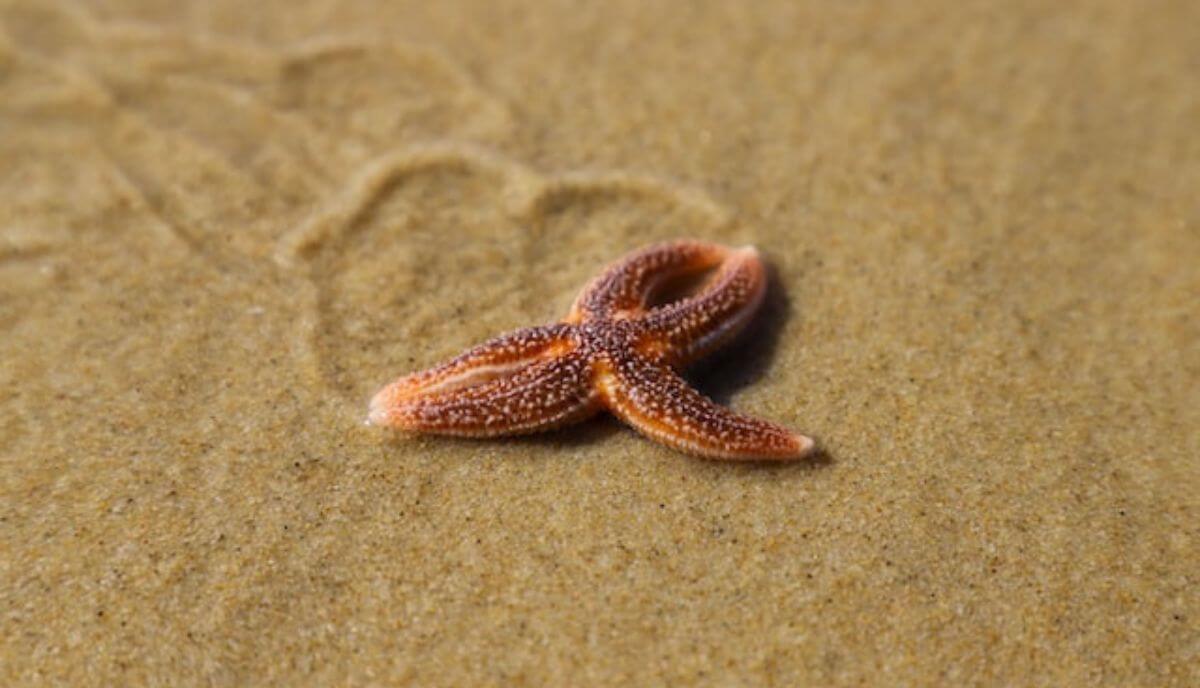 If you are interested in learning more about animals with spiny skin and what physical traits make each of them unique, keep reading!

Examples of Animals With Spiny Skin

Brittle stars have little disk-shaped bodies and usually five thin, long arms that are spiky and forked. While their limbs can easily become severed, they also very quickly regenerate.

One species of the brittle star is the basket star, which has each arm branching more than a few times. The outstretched arms of basket stars can reach almost 3 feet across. You can only find these creatures in the deepest waters, as they can reach for their food here.

Interestingly, brittle stars lack an anus, and their tube feet sense odors and light. When feeding, they extend one or a few arms over the mud and into the water. The other arms are used as anchors.

The brittle star, most of the time, scavenges for plankton to feed on, but this doesn’t mean it can’t also sometimes trap larger sea animals. This sea creature moves jerkily and usually clings to sponges, cnidarians, or the seafloor. 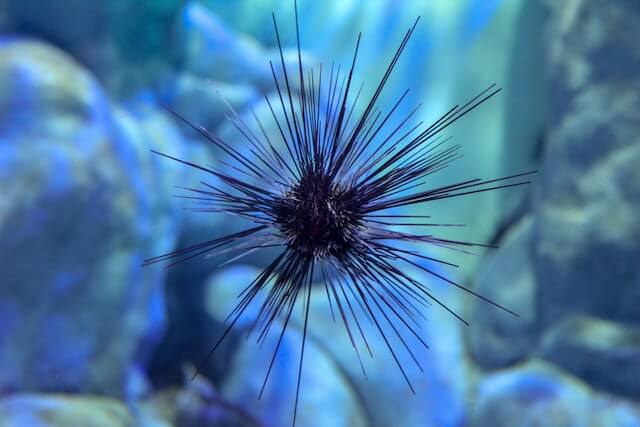 Urchins have globular bodies. Their organs are arranged radially, showing five pores bands running from their mouth to their anus and over their internal skeleton.

The urchin’s pores accommodate the animal’s tube feet. They are, most of the time, sucker-tipped, extensible, and slender. Their test nodules have movable spines and pincer-like organs coming out of them. You should know that these structures could harbor poisonous glands.

Furthermore, urchins have their mouths located on the underside of their bodies. Their dental apparatus is very complex and named “Aristotle’s lantern.”

Since it feeds on scraped algae and food present on rocks, the urchin has teeth that excavate in coral, rock, and even steel. It rests on the ocean’s floor, where the surface is hard, using its spines and feet to move from one place to another.

Feather stars have five feathery fringed arms that they often use for swimming. They feed on floating microorganisms by capturing them in their sticky arm grooves. They also have grabbing legs, called cirri, to cling to corals, sponges, or other substrata.

Though they are more than often called “comatulids” too and typically fall under the Comatulida order, feather stars have been, in fact, divided into numerous orders by different authorities.

Most feather star species are found in shallow water, resting on stony grounds. The Tropiometra is the most prevalent genus and inhabits the Indian Ocean and Japanese waters. In the Atlantic Ocean, the most well-known genus is the Antedon. 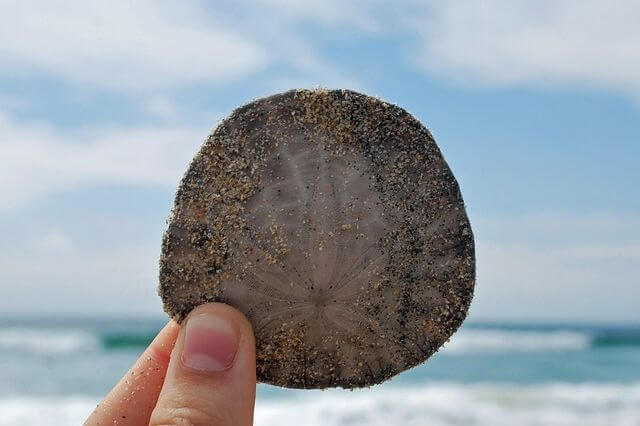 The next animal with spiny skin is the sand dollar, the closest cousin to the sea urchin. On sandy surfaces, this species is very well suited for digging.

Its entire body is covered in tiny spines that become compressed rearward in the direction of its anus. These spines are very useful for crawling and digging.

The center of the sand dollar’s body bottom houses the creature’s mouth. A pattern on its top surface exhibits 5 “petals” that extend out from the center. In other words, the symmetry displayed on this sea creature is pentaradiate.

Some sand dollar species discovered stranded on North American shorelines have 5 or 6 slots called lunules through their external skeleton.

Most sand dollars are 2 to 4 inches in diameter, except for the ones living in Antarctica and Europe. 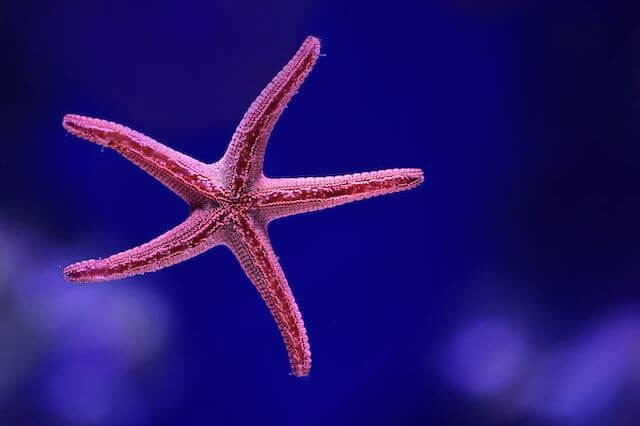 Despite their other popular name (starfish), sea stars are not fish. All the seas on the planet have nearly 1,600 sea star species alive, with the northern Pacific owning the largest diversity.

Most of these invertebrates with spiny skin are between 8 and 12 inches in diameter, whereas some are under 0.4 inches. Many of them measure 25 inches wide.

The sea star’s 5 arms are hollow and covered not only with small spines but also with pedicellariae (organs that resemble pincers) featuring tube feet rows on the bottom side. These tube feet could be pointy, or they could be sucker tipped.

The sea star can shed its limbs and then regrow them. It moves in all directions and sticks to the steepest surfaces thanks to its tube feet.

Carpoids are unique extinct prehistoric echinoderms. They didn’t have the radial symmetry that other echinoderms possess and didn’t appear to have ever had water vascularize their system.

Carpoids typically had a flat body with a plate calcitic system and stem or arm-like appendages. These sea creatures could be connected to the most basic vertebrates or chordates because they are the ancestors of more complex echinoderms.

Some carpoids seem to have gill slits, and this is a characteristic observed in ancient chordates. 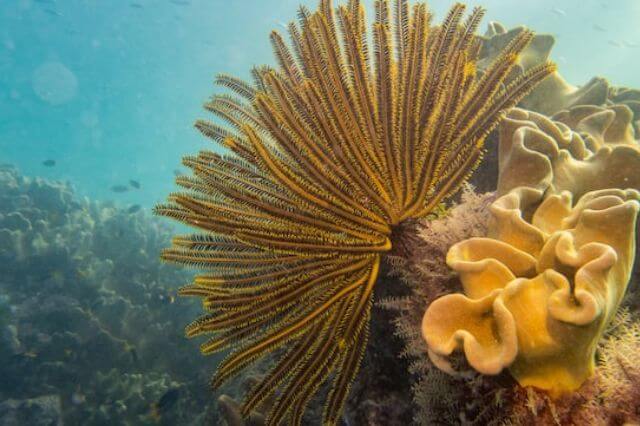 Any aquatic invertebrate from the phylum Echinodermata class Crinoidea, called crinoids, usually has five active and flexible arms (subdivided into 10+) attached to a body resembling a cup.

This marine creature’s reproductive organs are in the arms and bear many tube feet with sensory properties.

The arms of crinoids are bordered by feathery projections or pinnules. Food particles are swept in the direction of the mouth by tiny cilia-hairlike extensions along the open grooves of the animal’s tentacles.

There are over 700 known extant crinoid species found in the deep seas.

And there you have it. With this, we conclude the list of animals with spiny skins. As you can notice, all these creatures are invertebrates and live in the sea. Some, like the urchin, are poisonous, so you wouldn’t want to get too close to them. Others, like carpoids, are extinct.

However, there are many other creatures that you can study closely if you decide to go on an adventure at the bottom of the sea. Or, you could always get a sea star for your aquarium, as this spiny-skinned animal has the most vibrant and beautiful colors.

Thank you for sticking to the end. If you liked this article, here’s another popular article about sea creatures: Sea Animals With Shells.