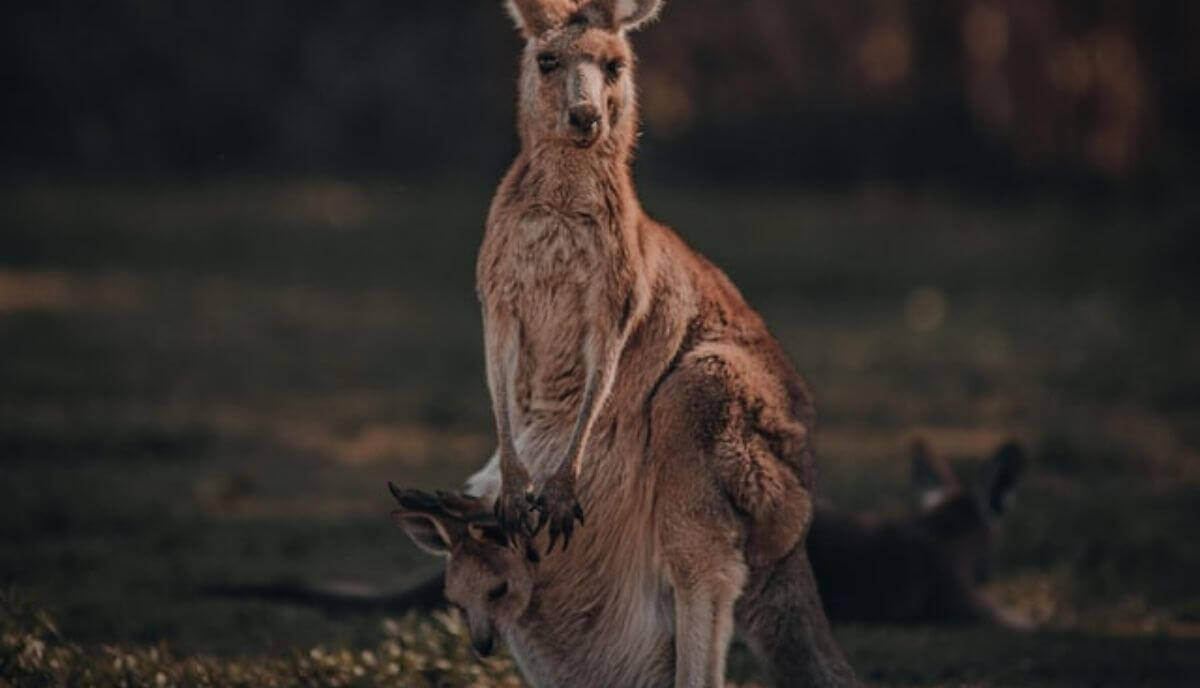 One unique feature about animals that we do not find in humans is their ability to carry their babies in a pouch attached to their bellies. Animals with pouches are called marsupials, and there are approximately 250 different species that belong to this category.

The babies of marsupials are born prematurely and are nurtured and protected in their mothers’ bellies in a pocket-like pouch. This pocket is called a “marsupium.”

One animal that pops up in our heads when we think of mothers’ carrying their babies in a pouch is none other than the kangaroos! But there are various other animals too.

Let us check the list of 6 animals with pockets. 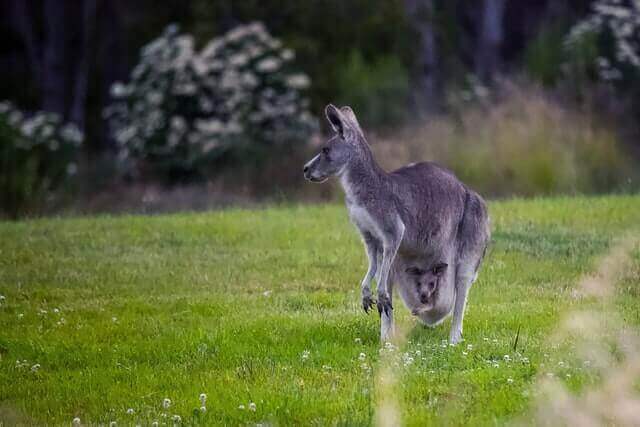 Kangaroos are animals with pouches that are native to Australia and New Guinea and belong to the ‘Macropodidae’ family in the animal kingdom. They are known to be the largest marsupials in the world, where the Eastern gray kangaroos (male adults) can be nearly 7 feet tall, and the red kangaroos are at least 5 feet tall.

Did you know most kangaroos are left-handed? Studies have shown that eastern grays, red-necked wallabies, and red kangaroos are primarily left-handed when it comes to performing tasks such as eating and grooming.

The period between conception and birth for kangaroos is close to five weeks. They mostly produce a single baby who is no larger than a grape’s size and is called a “joey.”

Not to forget, the baby also poops and pees in the pouch, and that’s the reason mommy-kangaroos have to clean the marsupium regularly. 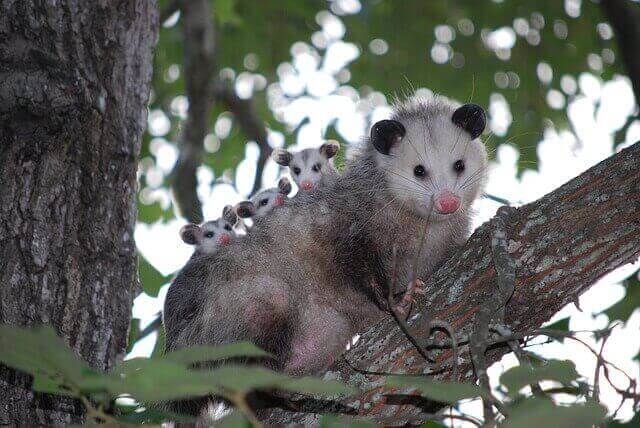 Medium-sized animals with pouches who are endemic to the Americas, opossums, are mostly the size of house cats. These marsupials like to keep themselves isolated as they are shy and slow. They also tend to move around during the night in search of food.

Opossums are beneficial to humans because of their qualities in keeping unwanted pests like rats, mice, cockroaches at bay.

They help to keep the gardens clean and in good shape by eating slugs, snails, fallen or overripe fruits. Wiping out any tick that comes their way by eating them, thereby reducing the spread of Lyme disease.

The lifespan of an opossum is very short; a four-year-old wild opossum is almost rare. Female opossums mostly live through one breeding season, where she raises two litters of close to a dozen babies.

After the young ones are born, they crawl up to their mother’s pouch, where they are nurtured for about 50 days.

As and when the babies are at least 4 inches in size, they crawl out of the pouch and ride on their mommy’s back. The young ones are so small that even if they fall off from the back, their mother may not even notice! 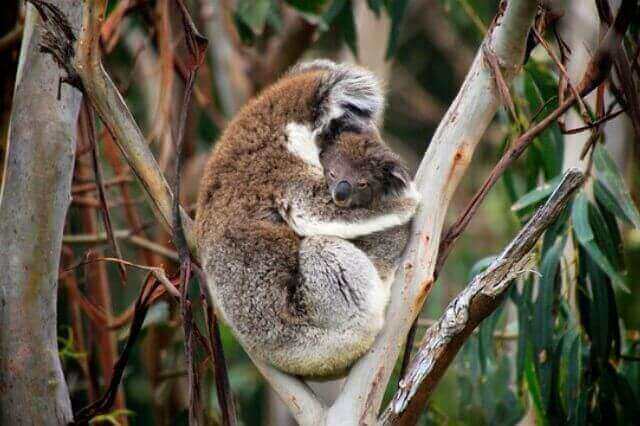 The cute and fluffy animals, koalas, are somehow inappropriately called the “koala bears.” However, a koala is not a bear, even though it may resemble one! Koalas are native to Australia and are marsupials.

They are very fussy about food, and their diet only includes eucalyptus leaves which they can eat up to a kilo per day. As these leaves are low in nutrients, koalas need more sleep to conserve energy, and they can sleep up to 20 hours daily.

Due to their sleeping habits, many people consider koalas boring animals.

The koala babies are also called joeys, and they develop in their mother’s pouch for up to six months. After this period, they ride on their mommy’s back for another six months, where they use the pouch only to sleep and feed. 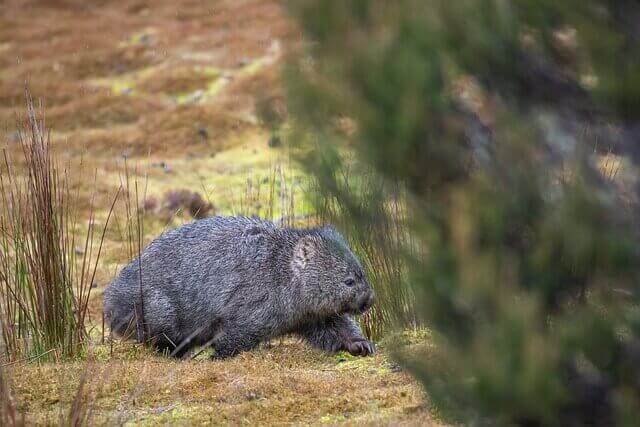 Wombats are short-legged marsupials and fall into the category of animals with pouches! These creatures are native to Australia and mainly emerge at night to eat herbs, grasses, roots, and the bark of trees.

They excel at digging, and their bodies are also built in such a way that makes it easier for them to dig through tunnels and chambers.

The wombat newborns are too tiny and under-developed when they are born, and they crawl from the birth canal to their mothers’ pouches and stay there for about 7-10 months for nourishment and protection.

The uniqueness of the pouches is that they are placed backward in the mother’s wombats, which makes it easier for her to dig without allowing her pouch to get dirty.

Even after the babies emerge from the pouches once they have grown into young wombats, they are often found to crawl back to their mothers’ pouches to escape danger or simply to nurse. 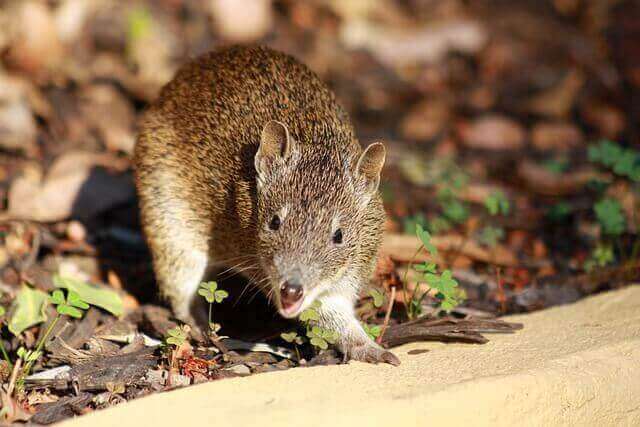 Bandicoots are small-sized creatures found in Australia, New Guinea, and its neighboring islands. They are mostly nocturnal and are the solitary types.

These tiny animals with pockets excavate pits to search for insects and plants to eat. Bandicoots fairly resemble “rats,” but they have a long nose!

Bandicoots have a gestation period of only 11 days, which is known to be the shortest period amongst all marsupials.

Female bandicoots can give birth to up to five babies at a time, and they are only about a cm long when born. The babies live in the mother’s pouch for about 3 months before they are independent. 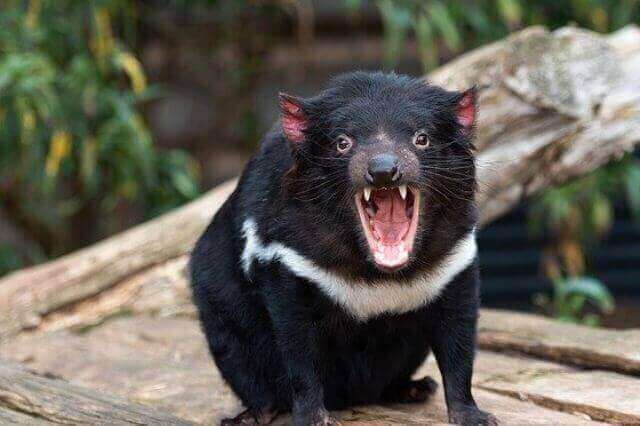 Predominantly found across Australia earlier, Tasmanian devils can be spotted only in Tasmania at present. They are known to be the largest carnivorous marsupials in the world, with a reputation of having a bad temperament.

In a matter of seconds, these creatures turn furious when attacked by a predator or when they have to protect their meal. Their diet consists of small creatures like birds, insects, fish, and frogs.

The female Tasmanian devils reproduce at least 20-30 (up to 50) young babies after being pregnant for 3 weeks. The button-size kids climb up their mother’s fur to find their way to the pouch.

Babies are nurtured and fed in the pouch for about 3 to 4 months until they’re fully developed. It should be noted here that the mothers have only 4 nipples, which is not enough to feed all the babies. This is why not all her kids survive.

There you go, these are the top six most known animals with pouches coming from the Marsupial family.

I am sure you knew a few of them but couldn’t recall every animal. Either way, I hope you have learned something new about these unqieu creatures with special physical characteristics, or very least, you’ve boosted your animal quiz knowledge.

If you enjoyed this article, I would recommend a similar read – Animals With Trunks.