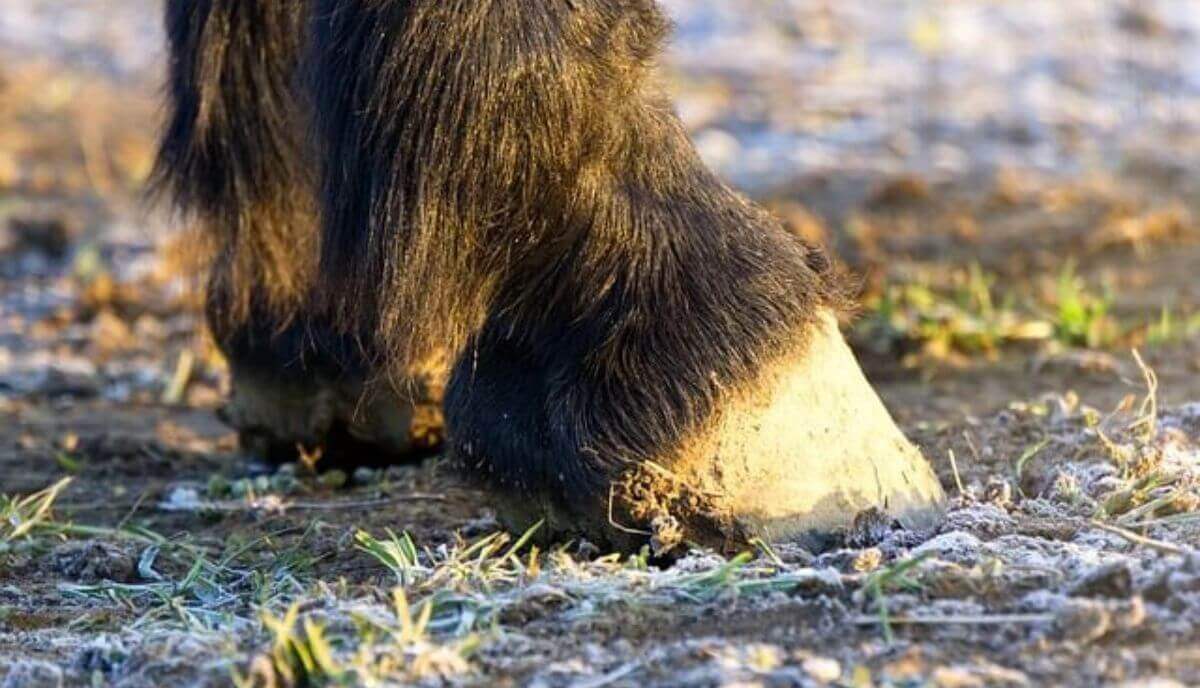 If you wonder what animals have hooves and what these animals are called, you are not alone. Hoofed animals are also known as ungulates.

Animals with hooves form one of the largest groups in the animal kingdom; they include donkeys, bison, cows, pigs, hippos, giraffes, deer, and many others. There are two types of hooves among animals; odd-toe and even-toe hoofs.

Most of them are herbivores, and they are usually at the very bottom of the food chain. Some species are found in the wild, while some of them are domesticated.

Ungulates are very important not only in the wild but also to human beings. They form the largest group that is hunted and domesticated.

Without them, animals in the wild would not have anything to pursue, while people would primarily face a shortage of milk and meat.

The following comprises the list of animals with hooves, both domestic and wild:

The first members on our list of animals with hooves are addax. This antelope is also known as the desert antelope, and it is highly endangered. Their bodies are about five feet long and often weigh between 100 and 300 pounds.

Addaxes have a grey to brown coat in the winter and whitish around summer. The addax has long twisted horns in both males and females, and it can measure up to 4 feet.

Their hooves are broad and have flat soles and strong claws that come in handy when walking in the soft desert sand. They are primarily found in the Sahara, where they can be found living alone or in groups of about four.

The female usually isolates when it is about to give birth accompanied by a male and will rejoin the herd soon after giving birth.

Also known as the African wild ass, it is part of the horse family. Their total body length is about seven feet, and they can weigh up to 500 pounds.

They have a buff grey coat with a sparse mane on their heads. In the wild, they are found in the deserts of East Africa, especially in rocky areas.

When domesticated, they mainly help humans in carrying loads in the home. Donkeys eat various types of vegetation, from grasses, bushes, and thorny acacia trees.

The main threat for donkeys is humans, who not only domesticate them but also hunt them for flesh. They are also killed to make traditional medication. As a result, they are considered an endangered species since their numbers are quickly declining.

The American bison is another endangered animal that is close to extinction. There are hardly any more bison roaming freely in the wild.

However, groups in America and Canada either publicly or privately own them. There are approximately 500,000 bison worldwide, with only 25,000 being purebred.

American Bison is quite enormous, reaching lengths of 11 feet, and can weigh up to 2,000 pounds. Their bodies are covered by hair which is uneven across various body parts.

Male and female bison have short horns that can grow to two feet in length. In addition, they have hooves with flat soles. Bison has a great sense of smell that they use to detect predators from distances of up to 1km.

Sheep are popular livestock and they have been one of the first domesticated animals. With a total population of over 1 billion individuals, sheep are fundamental to many worlds’ civilizations.

Closely related to goats, cattle, and antelopes, sheep are also ruminants that have stomachs with multiple compartments. Also, like their relatives, sheep have cloven hooves (even-toed).

It is very important to keep sheep hooves clean; as stated by farmers, unclean hooves may lead to various diseases for the animal. It is advised to cut down and clean their hooves every six to ten weeks.

They are also known as African buffalo and are found in African forests and savannahs. These giant herd animals are primarily found in large herds comprising females and their young ones of up to three years. Males usually live alone or in small groups of around four.

Buffalos belong to the cow family even though they are much larger. Their bodies reach lengths of 11 feet and can weigh up to 1,500 pounds.

Females bear one calf at a time and have a gestation of 340 days. At birth, the calf weighs around 88 pounds and is usually hidden by the mother for the first few weeks. It is nursed and protected by the mother, after which they go on to join the herd.

Males usually leave the pack after three years and either join other bachelor herds or roam independently. Females typically remain in their mother’s herd until they produce offspring or even longer.

Horses are hoofed mammals that have been domesticated since 3000 BC. They are fast and agile animals, adapted for running, which helps them escape their predators with great success. Also, they are able to sleep standing up, which further aids in their protection from predators.

These athletic creatures have had four functional toes. But during the evolution, they lost their side toes, and today, horses have a single hoof on each foot.

A horse’s hoof is very complex and a great example of Mother Nature’s capabilities. Knowing how small a hoof is and considering how fast these animals can move, the results are amazing.

The main parts of a horse’s hoof consist of the wall, sole, and frog. If you are interested in learning more about the functionality and anatomy of the horse foot, you can read more here.

It is the largest antelope worldwide, and its body length is between 7 and 11 feet and can weigh between 600 to 2,000 pounds. They are mostly found in the savannah and woodlands of central and west Africa.

Giant elands have a reddish-brown coat, but males have a darker one. The male fur is known to darken with age, and it is known to signify the androgen levels in the body.

These striped animals are characterized by 8-12 white lines that stretch vertically on their bodies.

The giant eland’s ears signal other animals when there is danger. Both the male and female have spiraled horns that form a ‘V’ shape, and they grow to a length of up to two feet.

They are pretty fast on their feet and can reach speeds of 40 mph. Apart from that, they are also excellent jumpers clearing up to 4 feet long.

By being herbivores, these antelopes feed on various grasses and foliage. When there is no grass, they feed on weeds and wild fruits.

Giraffes live in grasslands with scattered trees in parts of Africa and rarely in the west. They live in small herds, which comprise females and their young ones. The males usually live solitary lives except when it’s breeding season.

They have long legs and necks, which contributes to their extreme height. The body length of a giraffe is between 9 and 15 feet, and they have a shoulder length of about 15.5 feet.

Most giraffes have a sandy coat with patches of dark brown and black. They also have bony horns known as ossicones on their heads that are more common in adult males.

These tall giants mainly feed on acacia trees which they reach easily due to their height. However, during drought, they may feed on lowly shrubs.

These semi-aquatic animals have a length of up to 11 feet and can weigh up to two tons. Hippos have heavy bodies with short legs where each toe has a hoof.

Their heads are large and can open up to 150 degrees wide with sharp teeth even though they are primarily herbivorous. Their eyes and nose are on top of their heads, which allows them to keep most of their bodies fully submerged.

Hippos are found in east, west, central, and South Africa, where they spend most of their days in water and often come out at night to feed on the grass and plants close to the river or lake.

Interestingly, despite being semi-aquatic, hippos are animals that can’t swim. However, they can also remain underwater for about five minutes.

These are medium-sized animals of the antelope family. They have a length of around five feet and can weigh up to 150 pounds. Impalas are fawn-colored and may have black stripes on their lips and tail.

They are known for being quite vocal. Males emit loud grunts when mating, while calves usually make bleating noises. In addition, both males and females make loud snorts to warn the others when they sense danger.

Impalas are found in the grasslands in Africa and are often located close to watering holes. This makes crocodiles one of their biggest predators.

Their herds usually consist of females and their young ones living in large tracts of land, which they defend fiercely. Adult males typically make smaller herds of around 30, but they are not territorial.

In some cases, they can be found mixed with female herds. However, they usually integrate with females during mating season.

Likewise most domesticated herbivores, cows are equipped with even-toed hooves, consisting of two separate ‘claws’. The wide hooves serve as a protection for the animal bones and nerves contained within.

It also helps them in walking on different terrains, such as wet fields and forests, and other muddy pasture habitats.

Like humans’ nails, cows’ hooves grow throughout their lives. Over the year, the size of their hooves can grow up to one inch.

And in order to prevent different health issues, farmers trim their hooves on regular basis. As a rule of thumb, an adult cow needs to have its hooves trimmed every six months.

The last member on our list of animals with hooves is the pig. These legendary domestic animals are some of the most important creatures for mankind.

A pigs’ hooves are also divided in two, which provides them additional stability when walking on rough and uneven terrain. Their hooves also come in handy for self-defense. Apart from balance and stability, they are used for kicking potential attackers.

Besides domestic pigs, this type of even-toed hooves is also found in wild pigs.

Hoofed animals are found in even-toed and uneven-toed species. The even-toed usually have between two and four toes, while the uneven-toed have only one or three. The number of toes found on any hoofed animal depends on their adaptation; for example, in camels, their hooves have been reduced to a small nail-like tip. While most ungulates are herbivores, there are some omnivores, such as pigs.

And there you have it. You’ve come to the end of the “animals with hooves” article. We hope you’ve enjoyed reading it, or at least that you’ve learned something new today about ungulates.

For the very end, here’s our recommendation of a similar read: Animals With Fangs