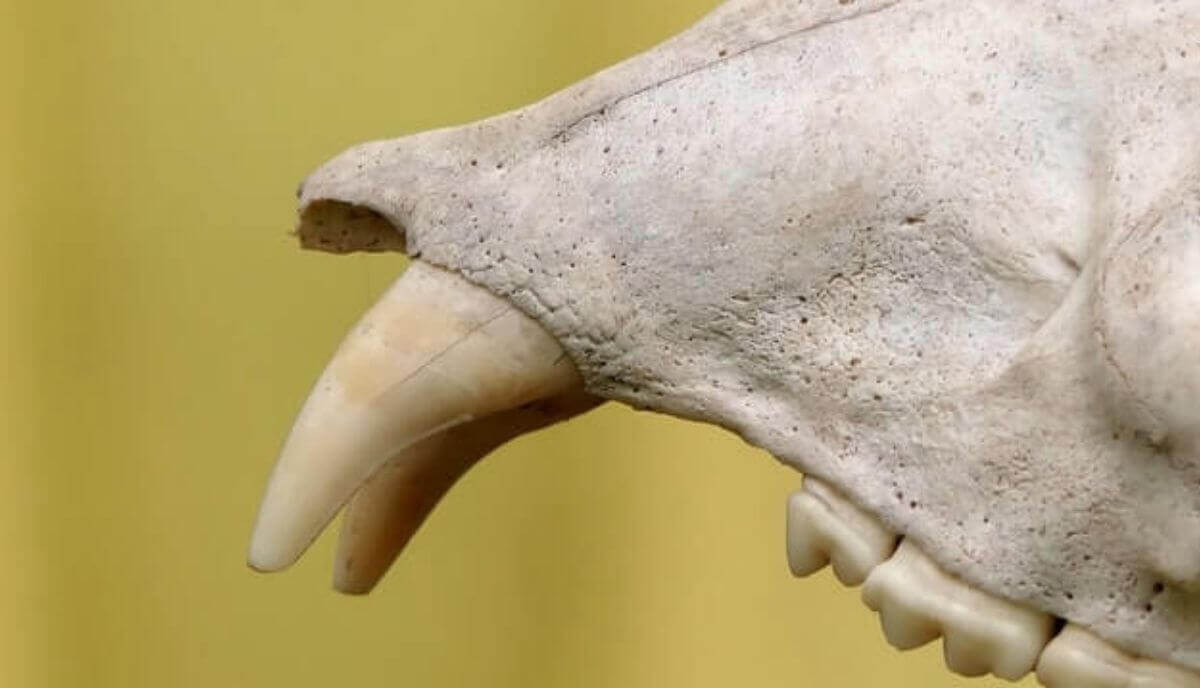 Fangs! What’s the first animal that comes to your mind? Snakes right? Most snakes have scary fangs, especially venomous ones. But did you know that there are many other animals with fangs too? Even herbivores.

Fangs are very important tools that help animals in carrying out various activities like hunting, tearing the flesh, scaring potential predators, defending territories, and inserting venom, among other uses.

But not all fangs are sharp. Some are blunt but can cause damage due to their huge size. 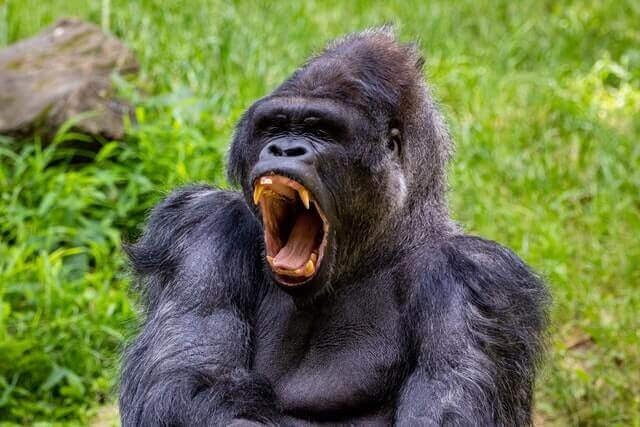 The first members on our list of animals with fangs are gorillas. A plant-eating Gorilla? Surprising, right? In males, the so-called fangs or canine teeth are extra elongated than a female’s.

Gorillas with longer fangs are more dominant. In other words, they are more attractive to the females during the mating season.

Silverback gorillas of different groups fight to the death on meeting each other. Besides their strong and bulky bodies, gorillas will use their long fangs to inflict deadly injures on their opponents.

In the wild, these great apes are found in the jungles of Africa. And unlike most primates, they do not typically climb trees.

Another herbivore animal with fangs, the hippopotamus, is the third-largest land animal! They have large teeth that are normally called tusks. But, its long teeth placed in the lower jaw are also called fangs.

The Hippopotamus uses these fangs to fight while protecting their babies or territory from outsiders. They even use them to battle other aggressive predators.

These giant animals have the largest fangs of any land mammal in the world.

Hippos are found in Uganda, Tanzania, South Africa, the northern Democratic Republic of the Congo, Gambia, and Sudan. 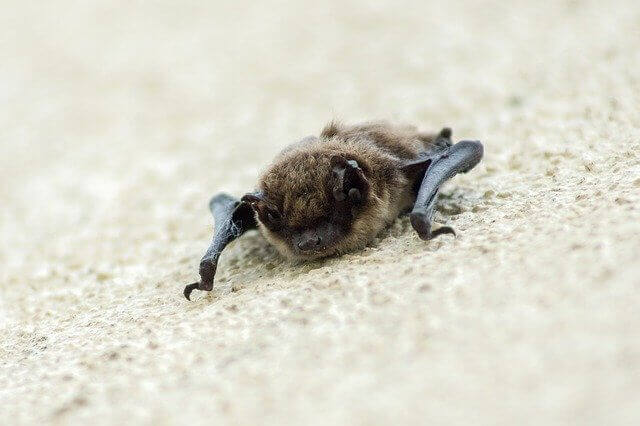 Infamous for its fangs in horror movies, here is the vampire bat! No, but this one does not shapeshift into a human, unlike the fictional character! These are small blood-sucking bats that prey on cows, horses, pigs, and birds.

Vampire bats have sharp teeth that look like fangs. Their diet is entirely made of blood.

They also have a special anticoagulant in their saliva that helps them suck blood. This saliva prevents the wound from closing, thus allowing the bats to feed on their prey.

These bats are silent killers. The anticoagulant saliva causes no pain or clotting while feeding. Thus the prey does not know it is being fed upon!

The Siberian musk deer is a species of musk deer with extended canine teeth length. Unlike most other deer, they do not have horns but make up for them with their long fangs.

Siberian musks use these fangs while fighting against other males during mating season. Their fangs are a sign of dominance and are even used to mark and maintain their territory.

These fangs are seen as an interesting anomaly as they have a vegetarian diet. As the name goes, Siberian musk is found in Siberia, the Himalayas, Taiga, Mongolia, and other cold parts. 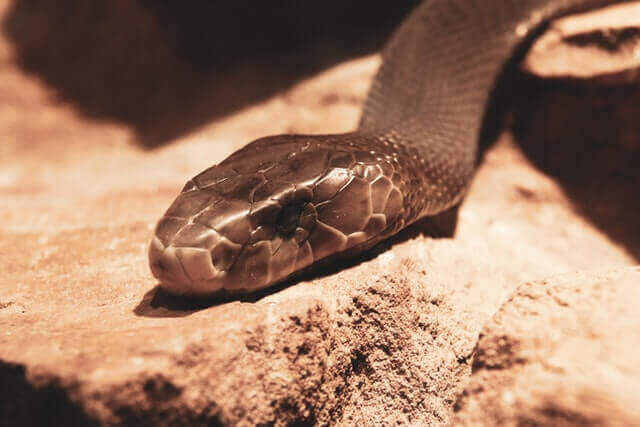 The black mamba is the second-longest snake after the cobra. It also has the fastest striking skill and is known for its deadly hunting ability. They are most commonly found in East and South African savannahs.

The fangs of the black mamba are hollow and razor-sharp. Their venom is deadly enough to kill animals ten times its size. These snakes are known to have killed lions, tigers, and even elephants.

Baby mambas have about 1 or 2 drops of venom in their fangs. Whereas adults have around 10 to 12 drops. The prey of these deadly reptiles is dead within seconds to a minute. 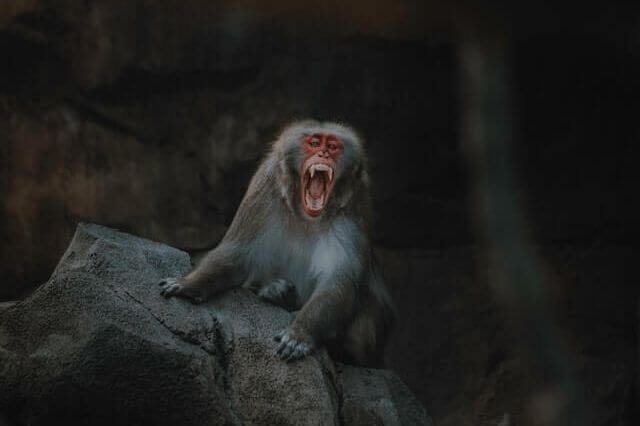 The mischievous baboons have also made it to this list of animals with fangs! Their upper and lower jaws are equipped with scary-looking fangs.

Their fangs help them hunt small prey like lambs, rodents, birds, and antelopes.

Apart from hunting usefulness, males with long fangs seem more attractive to other females. Further, long-fanged baboons use these characteristics to assert dominance and are often the leaders of their group.

All kinds of baboons are from the family of Old World monkeys. These primates are found mainly in Arabia, Africa, and other such places. 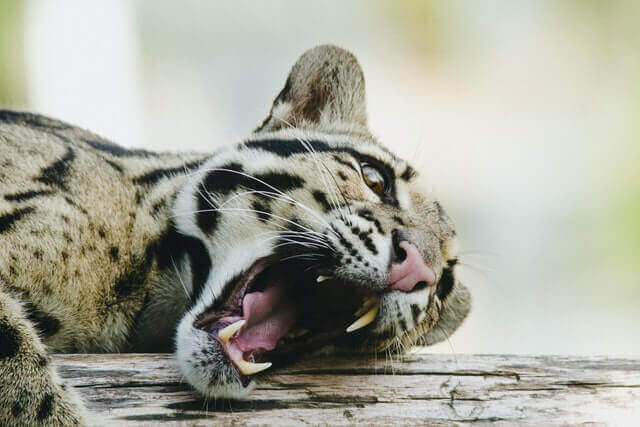 Like all other members of the feline species, the clouded leopard has two pairs of powerful fangs. Yet, they have the longest fangs in relation to their size as compared to other big cats. (source)

These cats primarily use their lethal fangs for hunting; they pierce through the skin of the prey and hold it firmly. However, their long fangs are also used for scaring off potential intruders, as well as protecting their territory.

Clouded leopards are strict carnivores, and they prey on macaques, gibbons, wild boars, and small deer. These cats are commonly found in southern China, Borneo, Taiwan, Nepal, Bangladesh, and India.

Did you ever think there would be fish more dangerous than the infamous Piranha? Well, meet the Payara. A payara is also known as a vampire fish.

This is because their lower jaws are lined with large fang-like teeth. They are vicious carnivores predators that catch the prey by using their long fangs. Payaras even hunt other fishes of their size!

These fish are common in the Amazon Basin in South America. They go by many other names like Dracula fish, Wolf-fish, and Sabre-toothed tiger fish. 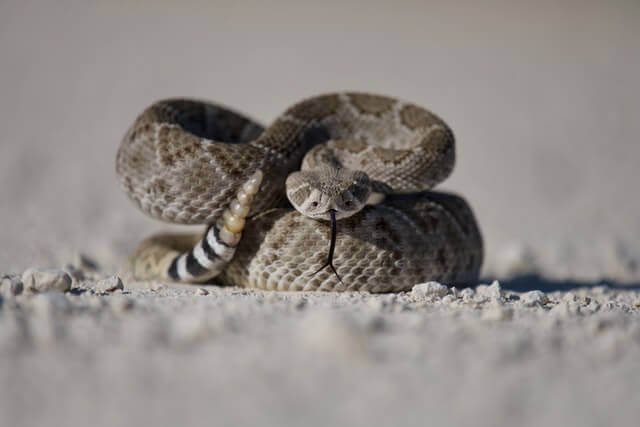 The eastern diamondback is the largest rattlesnake around. A venomous snake that possesses a powerful set of fangs.

Its curved fangs are hollow and connected to the venom glands inside. The principal use of their fangs is to inject venom into their prey.

These excellent predators can retract their fangs inwards and parallel to their mouth roof. Their prey includes rabbits, birds, rats, squirrels, and other small mammals. 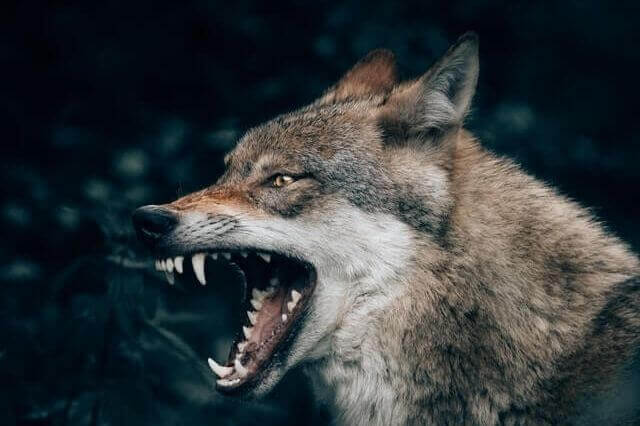 This is the common wolf that is also called a gray wolf due to its color. Gray wolves have four canines out of their 42 teeth. The canines on the top jaw are longer than the ones on the bottom.

Wolves use these pointy teeth to hunt and catch their prey in their powerful jaws. These sharp canine teeth prevent their prey from escaping.

Wolf’s fangs also pierce through the cartilages and bones of their prey’s throat. The most common prey of the gray wolf are deer, moose, beavers, and even some smaller foxes.

The Goliath Birdeater is the largest and heaviest species of the tarantula spider. They also have the longest fangs compared to other species. Their fangs have venomous glands attached to them.

The Goliath Birdeater injects its prey with venom and kills it almost instantly. Its venom can even break through human skin.

However, the goliath’s venom is safer for larger animals, including humans. They would feel as much of a sting as a wasp.

As the name suggests, it is large enough to feed on birds too. But, its diet mainly consists of earthworms, rodents, lizards, large frogs, and snakes. 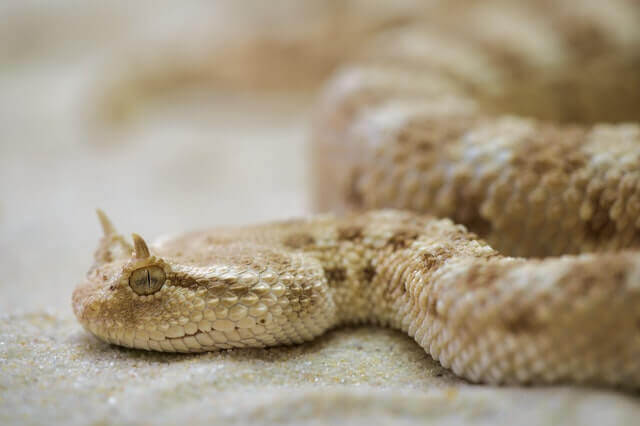 The Gaboon viper’s bite can be fatal to its prey. It is beautiful, yet, a scary snake that kills its prey using fangs.

Due to its long fangs, it can yield more venom. They feed on mammals, birds, and many kinds of rodents too. Field mice, hares, and rabbits are their favorite.

Its venom-filled bite is dangerous to human beings as well. The Gaboon viper is mostly found in western and central Africa. 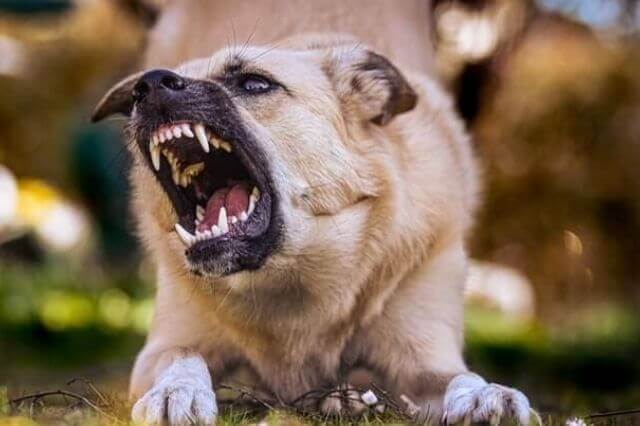 The dog also referred to as ‘man’s best friend’, is a canine species that descended from an extinct wolf. The first domestication started during hunter-gatherer civilizations over 15,000 years ago. In fact, dogs were the first and the only big carnivores that have been domesticated.

This scary but cute-looking species of water deer is next on our list! Commonly found in the southeast, they are also called Chinese or Korean water deer.

It is a small-sized deer having sharp, lengthy canine teeth protruding from the upper jaw. Like most herbivores with fangs, vampire deer also use theirs as a sign of dominance.

During mating season, male deer use their fangs while competing against other men. They also use them while taking care of their territory. 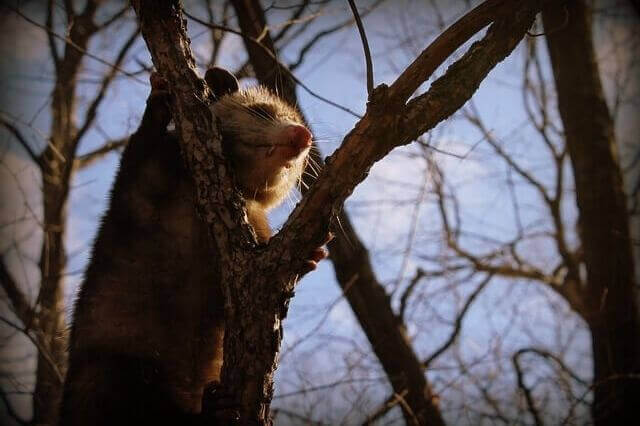 Opossums are opportunistic omnivores that feed on virtually anything that they can get their hands on. They are attracted to carrion, but they are often seen near garbage cans and dumpsters, looking for food.

Interestingly, these marsupials have more teeth than any land mammal in the U.S. Opossums have a total of 50 teeth, including two pairs of fangs.

These creatures will use their fangs to tear off meat and to try to scare off potential predators. However, if their predators are too big to get scared, opossums will play dead and wake up once the danger passes. 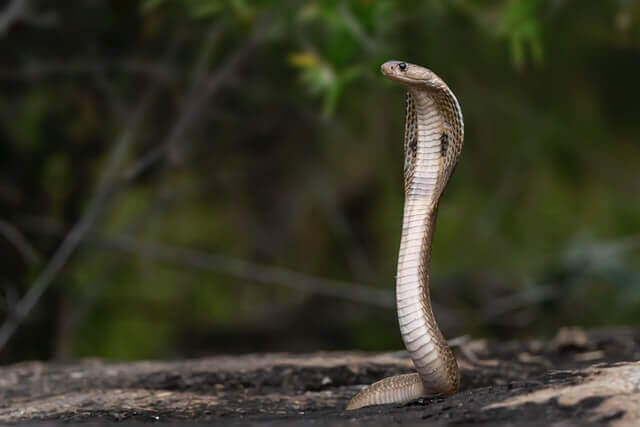 Perhaps the most dangerous of them all, the king cobra is a well-known animal with fangs. It is the longest venomous snake in the world.

The fangs of king cobras are long and hollow and are placed in the upper jaw.

King cobras catch their prey by injecting them with deadly venom. The venom immobilizes their prey, and the snake proceeds to eat them whole.

However, they cannot hold their prey for too long, and so, in time, they adapted to fangs to kill their prey by slowing them down with poison. 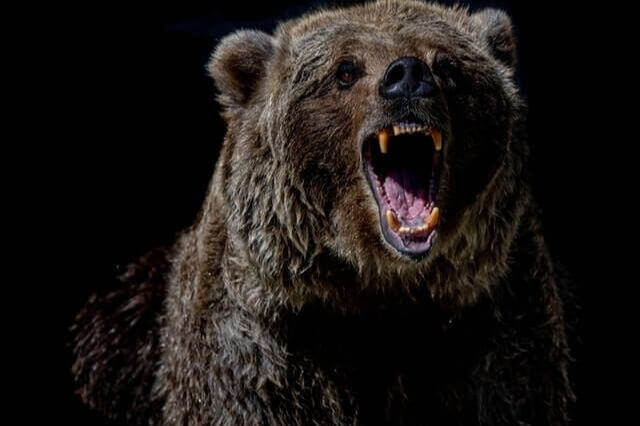 The last members on our list of animals with fangs are bears. Today, there are eight extant bear species; found in Asia, Europe, North and South America. These big mammals are classified as caniforms (doglike carnivorans).

Most species are categorized as omnivores, feeding on both meat and plant-based food. They have a total of 42 teeth, including 10 molars, 12 incisors, 16 premolars, and 4 canines.

Unlike big cats or other canines, bears do not bear their teeth when they feel defensive. The main use of their fangs is when hunting live prey to pierce through the skin of the animal.

The length of the fangs can vary between species; however, an adult bear typically grows its fangs close to 3 inches in length.

Above are some of the fascinating animals with fangs found in the wilderness. Most of these creatures use these pointed teeth for hunting or protecting themselves and their territory. While herbivores, besides defensive purposes, usually use fangs to display dominance during mating rituals.

And that’s about it. Thank you for reading. Hopefully, you found this article helpful and informative. For the very end, we would like to recommend you a read on a similar topic: Red-eyed Animals