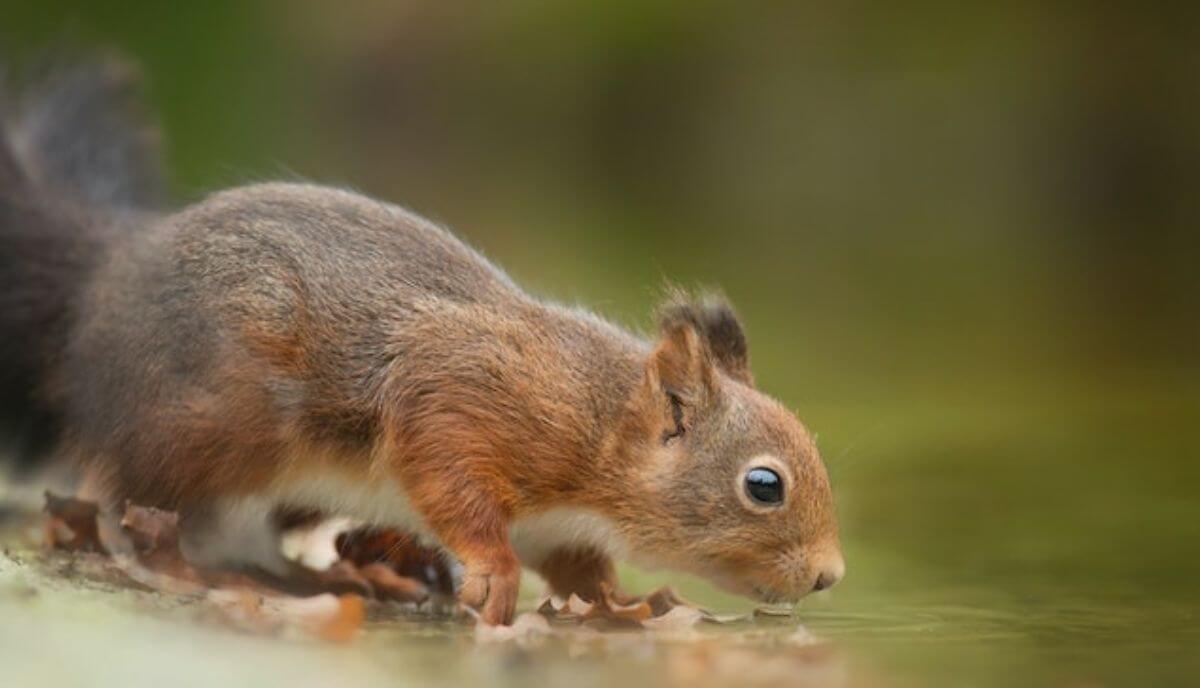 It’s a well-known fact that life without water is unthinkable for all living beings. So they meet their hydration needs in different ways. Also, each creature needs different amounts of water depending on its size, habitat, and way of life.

Some animals that drink a lot of water do so very rarely, like camels, known for their endurance. On the other hand, there are cows and elephants, which hydrate themselves daily with considerable amounts of liquid.

In this article, we’ll talk about five animals that drink A LOT of water!

5 Animals That Drink a Lot of Water 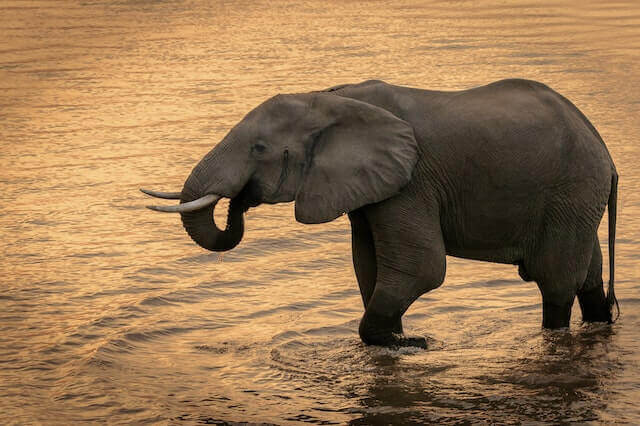 Do you know that a bathtub can hold about 50 gallons of water? That’s roughly the amount of water an adult male elephant can drink in less than five minutes!

And just in case, these animals can keep about 2 gallons of liquid in their trunks.

Also, elephants are always in quest of new watering holes. These large mammals have highly developed instincts and can ‘smell’ water from a distance of several kilometers.

Because of that, many animals follow a herd of elephants through savannas because it’s a safe way to find much-needed water. That’s why you can often see these giant herbivores followed by gazelles and zebras. 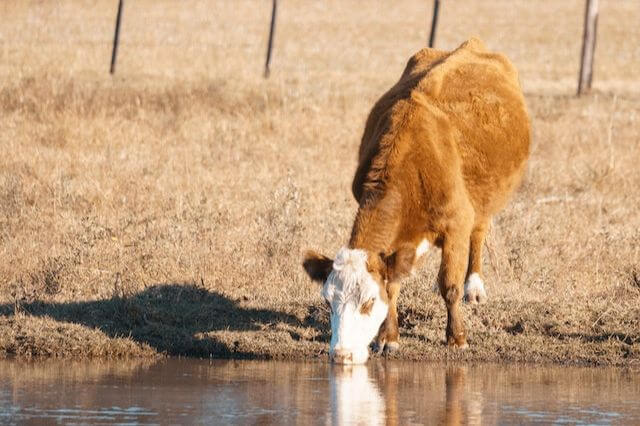 This might come as a surprise, but the cow is the thirstiest animal, considering the amount of water it takes in per body weight.

Depending on the cow’s lactation ability and outside temperatures, that can be a gallon or two per 100 pounds.

And if we keep in mind that the average cow weighs about 1,400 pounds, it’s easy to calculate that they need almost 15 gallons on cold days to even 30 gallons during high temperatures. 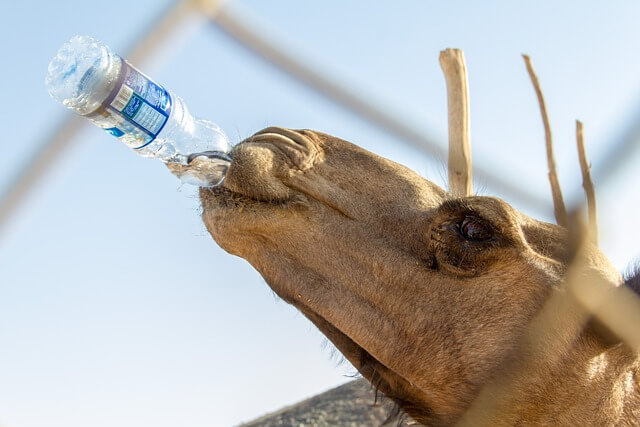 If you’re confused about what’s in a camel’s hump, let’s make it clear – it’s not water. In fact, it’s a fat that stores the necessary nutrients and helps camels stay hydrated without drinking a sip of water for more than two weeks.

But after that period, camels need to ‘refuel’ their water reserves to survive in the dry environment. And during just one refinement, camels can drink up to 20 gallons of water.

Food could also help camels stay hydrated, but its choice in deserts is small. So they must eat thorny, dry plants and low vegetation, which are not a great way to stay hydrated at high temperatures.

That’s why these animals rely on their fat reserves to survive in harsh conditions.

Like all herbivores, giraffes meet most of their water needs through plant-based food. The amount of leaves and fruits they eat in one day almost completely satisfies their hydration needs.

Yet, these gentle giants still need water. In fact, they drink it rarely but in huge amounts. An average giraffe can drink between 10 and 15 gallons in a day!

Another interesting fact is how giraffes drink water. Due to their size and neck length, they do that quite unusually.

When drinking water, giraffes spread their front legs wide and get down to the water’s surface, flipping their heads back after drinking to ensure the water gets to the right place. 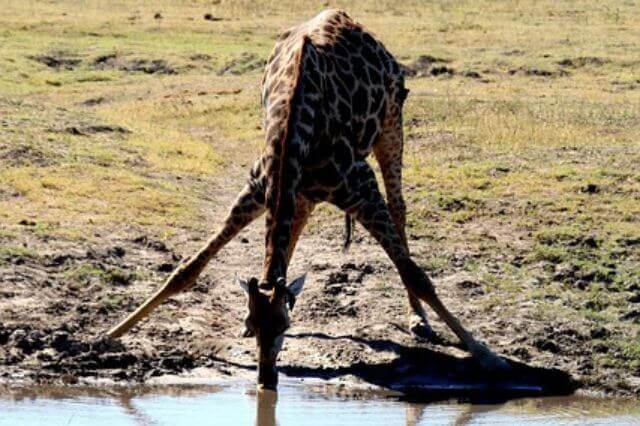 Horses are very active animals, even when they’re not in their natural habitat.

In colder habitats, an idle horse of about 1,000 pounds drinks between 6 and 10 gallons of water per day. However, in hot environments, the amount may increase to 15 gallons of fresh water daily.

Although among the thirstiest animals, horses can’t store water. In fact, they wouldn’t be able to withstand the lack of liquid situation for more than three or four days. 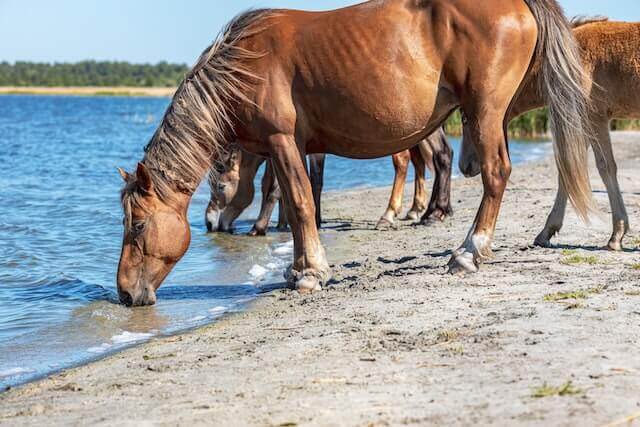 There’s a saying you should only drink water from the springs where the horses drink. It was probably created at a time when horses still roamed the wild, but it’s true.

These noble animals have a rather refined sense of taste, so they won’t drink stagnant water or water with algae or any dirt and mud.

Now that we know which animals drink a lot of water let’s summarize the most common questions on this topic.

Do All Animals Drink Water?

Water is essential for every living being, so the answer to this question can be – yes, almost all animals drink water.

Some animals drink water daily and in moderate amounts. While some species can survive without water for months, relying on the liquid stored in their bodies.

However, there are actually a handful of animals that don’t drink water – at least not in a traditional way.

For example, sand gazelles can go months without water because of the ability to ‘shrink’ their vital organs and thus reduce the need for liquid.

Which Animal Drinks the Most Water?

Thanks to their size, elephants are the animals with the highest water needs – they can drink between 40 and 55 gallons in one sitting. Considering they spend most of their time eating weeds, twigs, and hay, they need a lot of liquid to boost the digestion of these dry matters.

But, if we look at this parameter as the amount of water per pound of body weight, the animal that drinks the most water is a dairy cow. This bovid sometimes needs as much as 2 gallons of water per 100 pounds!

Which Animal Drinks Water and Dies?

Kangaroo rats, tiny rodents adapted to life in dry areas, might be in danger if they drink the water. Over time, this species has developed a mechanism for hydrating the body using water from the seeds. And an extra water intake would wash away the current supplies, leading to a lethal outcome.

But in general, animals aren’t in mortal danger when drinking water. In fact, they often do that from dirty and contaminated puddles and still survive.

They’ve adapted to life in harsh conditions, meaning they’ve developed immunity to deal with bacteria and parasites from water.